Yesterday, I was one of those who was going to stay away from the crowds of the Women’s March in downtown Portland. I am all for marches and protests, especially peaceful ones, but I also suffer from some anxiety surrounding these types of events. It’s not claustrophobia, but it does in a sense carry some of those connotations. To a certain extent, if I’m being truly honest here, I also kind of just didn’t want to be bothered. Bothered to go out into a cold, rainy day. To try and find a bathroom where the line isn’t half a mile long. To make sure I didn’t get pepper sprayed or get caught up in violence. To be on my feet all day.
My friend Claudia had stayed the night with me and she was getting ready for the March while I puttered around the kitchen, sorting out my day. She said, Why aren’t you going again? I said, Well, I have some things to do, and then an appointment, and…yeah. Kinda shaky excuses. Claudia, being one of my dearest friends, looked me in the eye and replied,

What will you say when future generations ask you if you were at the Women’s March on January 21, 2017? I had a hair appointment, the traffic was bad? I’m gonna say I joined thousands in a beautiful day of solidarity.

Well that arrow hit its target right on the nose. I packed my backpack with a hastened clump of waterproof clothing, snacks, hydration, wet wipes, and we were off to catch the bus. The first one flew by our stop, packed front to back with passengers. The collective groaning of a dozen people let loose on cue. Luckily, I live by a frequent service stop with several bus lines, so about seven minutes later another one came and it was only about half full. Huzzah!

Ready to roll out!

We got off the bus and headed to the spot where we were meeting other marchers. Claudia and I hadn’t exactly planned our entrance very well, and since we were already running late, had expected we’d just grab some food somewhere and take it with us to the march. Except every quick/fast service restaurant was packed with protesters. And it was pouring rain, so eating outside wouldn’t be as effortless as we had imagined in our head. And even if we did manage to eat our food without first soaking it in Portland’s famous “weather au jus,” we were standing butt-to-butt, and, since I’m so short, I’d most likely be eating a burrito to the tune of someone’s accidental elbow throw. That just didn’t sound fun to me. So Claudia and I broke off from the group to get something solid in our stomachs a little farther out, with the intention that we would meet up with the other ladies again later. We went to Thirsty Lion, since it’s huge inside and they are usually prepared for crowds. The restaurant was quite full, but we got seated right away. Our waitress was super! She was quick during a very busy time, answered our questions expertly, and best of all, helped us in a tiny way that had a huge impact. I asked her if she had two trash bags that we could have. At first she didn’t understand. I explained the beauty of how trash bags make fantastic makeshift raincoats! In the short half hour or so we’d been outside, Claudia and I were already partially soaked and it was not looking like it would let up any time soon. She came back with two industrial trash bags. They were gigantic—and perfect! We set up our new look. Rip a neck hole, two arm holes, help your neighbor put it up and over the her backpack, and there you go! We looked like two drowned rats with hump backs! Trés chic! 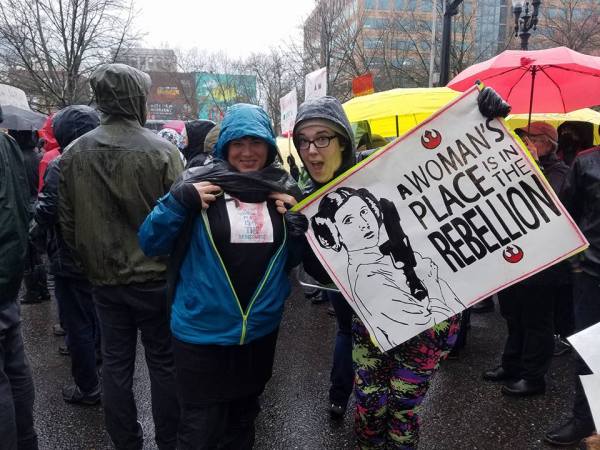 I didn’t know what to expect when we re-entered the crowd. I know the protests the night before had drawn all sorts of agendas, both peaceful and a little less so. There were flash-bang devices discharged, pepper spray dispensed, and a lot of anger spread out over the city, held mostly at bay by the Portland Police. I protested in the past during the Iraq War. Back then the police I experienced were much different. Instead of trying to prevent conflicts from arising and helping to keep the protests contained, they would bait protesters into angry reactions, thereby enabling them to “legally” detain protesters. I’m not sure when they beefed up their training on civil unrest events, but I have to hand it to them—they have recently done a much better job overseeing the crowds. (This is just my opinion. Feel free to comment below if your experience has been different.) Instead of putting on a show as tyrannical monoliths of punishment, they displayed their humanity. Cops with pink pussy hats on waved us on. Most of them smiled broadly at us as we walked by. I tried to thank as many as I could, because let’s face it, no matter how you feel personally about the police, you must understand that theirs is a tough job. 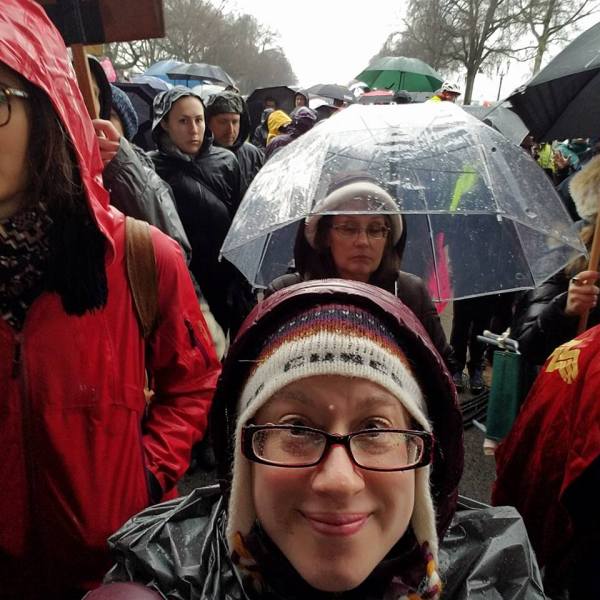 The energy was palpable. Everyone there was a cousin of the spirit! We laughed maniacally in the rain, danced in the sloppy mud mosh pit, shouted chants of positivity, squished butt-to-butt with our new friends, giggled at the amazing creativity of the signs, and most of all, came together with the intention of unity. 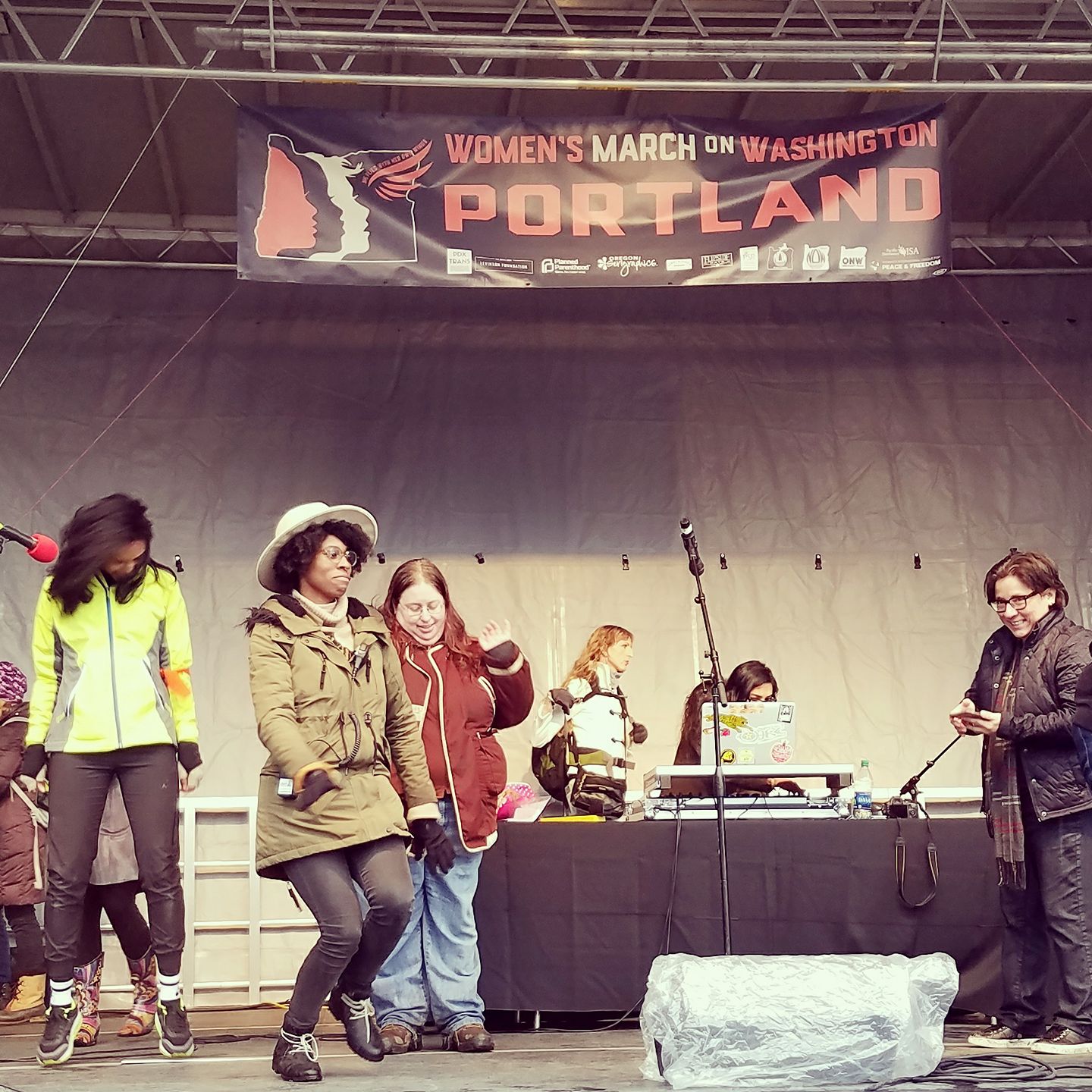 When the younger generation asks me where I was on January 21, 2017, I’ll tell them I was right there alongside the most beautiful, diverse, and loving group of people I have ever known.